Today's topic is Exchange 2010, which reaches end of support (EoS) on Oct. 13, 2020, as well as a survey of other versions of Exchange and how well they are being kept up-to-date. During our work with Project Sonar, we consistently see the use of old and EoS software on the internet. This is generally a cause for concern, because this typically means that vulnerabilities will not be fixed. It is also an indicator that the environment the software is running in has other security issues.

Before I move on, I want to point out that our numbers here will be fairly accurate, but not perfect. This is due to a couple of factors: First, the method that we use to fingerprint Exchange OWA allows us to determine the Exchange version down to <major version>.<minor version>.<build number>, but we cannot see the revision. For example, for Exchange Server 2019 Cumulative Update (CU) 7, with the latest updates the build number is 15.2.721.2, but we only see 15.2.721. This means that we can tell that the server is running 2019 CU7, but we can't be sure whether this month's patches were installed. Second, and most frustrating, is that Microsoft's updates don't always adjust the version number shown by tooling. Even Microsoft's own Exchange Admin Center and Get-ExchangeServer command will report incorrect versions in many instances.

Exchange 2010: A decade of support ends

Just under 11 years ago, Microsoft released Exchange 2010. On Tuesday, Oct. 13, 2020, Microsoft Exchange 2010 will reach End of Support (EoS) status. Microsoft will not provide any updates, including security fixes, after this date. While the software will keep working after this date, a quick glance at the Exchange vulnerabilities announced in 2020 will quickly show the importance of security updates. 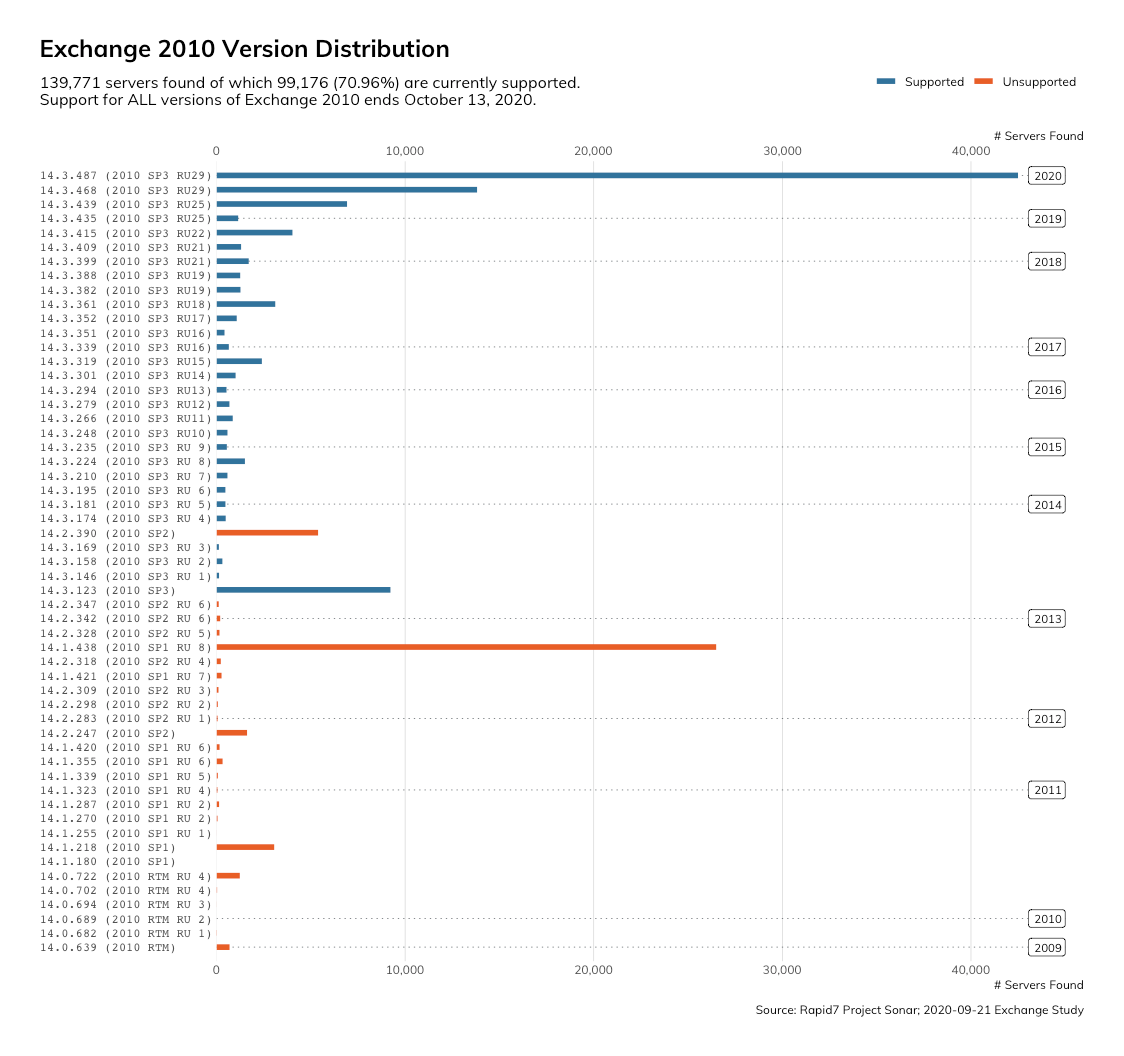 That's a scary number of servers that will not receive security updates for any future vulnerabilities. Both scary and disappointing is the fact that 40,000 of these were already running unsupported versions of Exchange 2010. Nearly 54,000 of these have not been updated in six years!

Exchange 2007: Long past its expiration date

Speaking of software that hasn't seen updates in years, there are 16,577 Exchange 2007 servers with OWA on the public internet. This product has been out of support for over three years. Additionally, the newest version of Windows Server that Exchange 2007 runs on is Windows Server 2008 R2, which reached EoS in January 2020. In summary, this is a business-critical application running in an environment in which vulnerabilities will not be fixed. 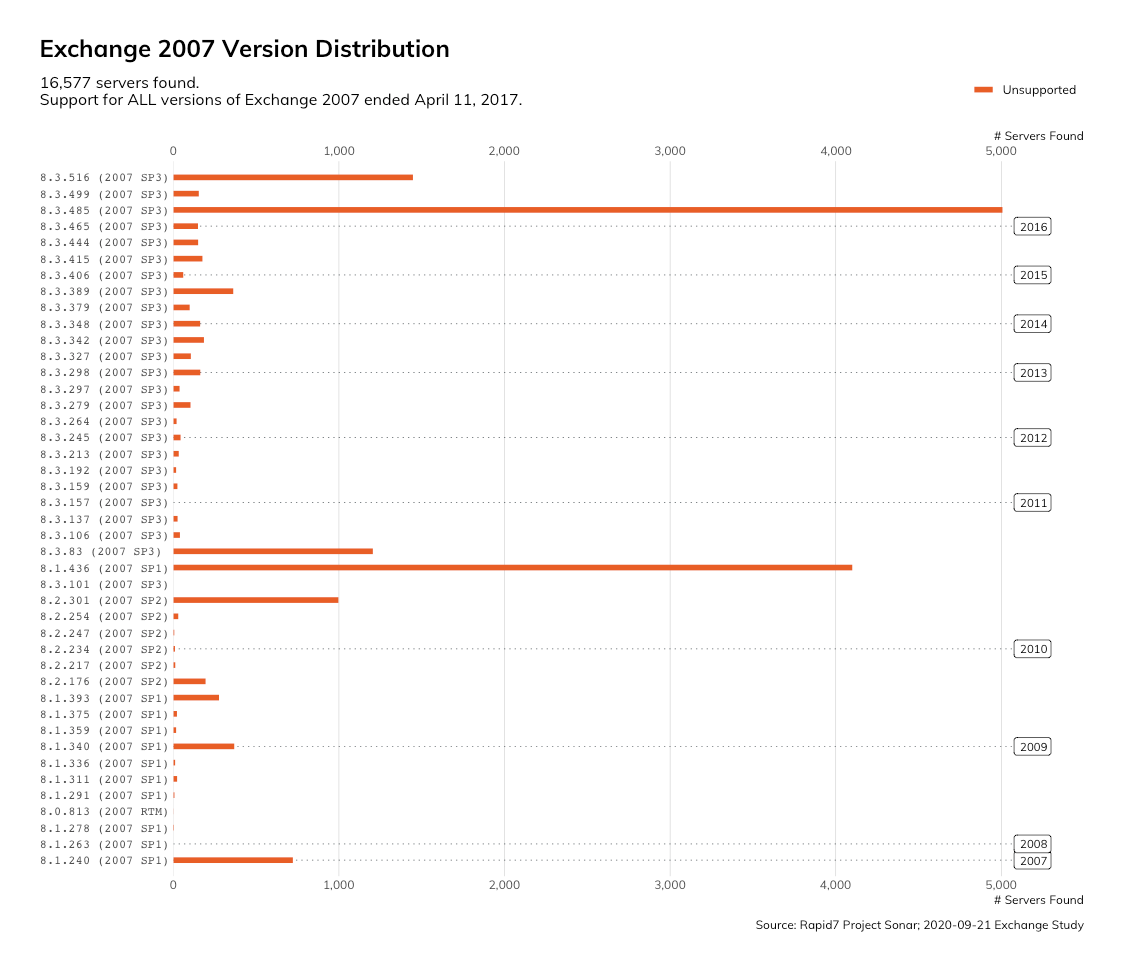 Exchange 2013 transitioned to Extended Support in 2018 and will cease to be supported at all on April 11, 2023. Additionally, the newest version of Windows Server that Exchange 2013 runs on is Windows Server 2012 R2, which reaches EoS on Oct. 10, 2023. In short, the full Exchange 2013 environment, other than AD, will be completely unsupported in less than three years.

Our Project Sonar metrics for OWA show that there are at least 102,593 Exchange 2013 servers on the public internet. Further, 67,567 (~66%) are not running a version of Exchange that Microsoft considers "Supported." 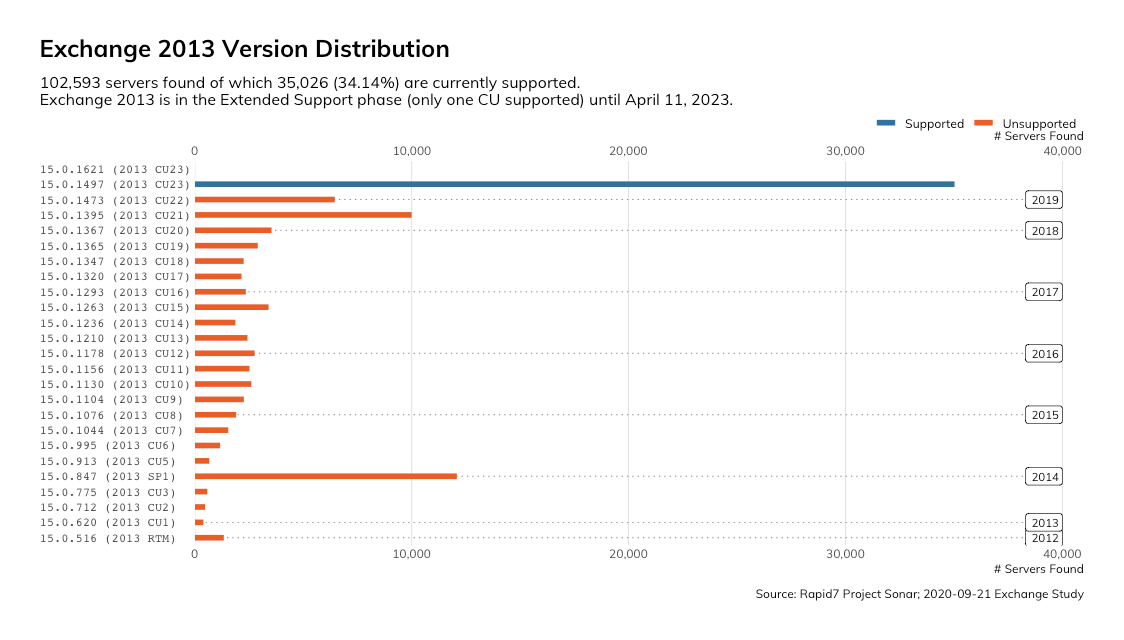 Given that Exchange is typically considered a business-critical application, and how complex an upgrade can be, we strongly recommend that organizations running Exchange 2013 start planning the upgrade process and timeline. The
"Upgrading considerations" portion of the "Taking actions" section at the end of the blog post calls out a few of the considerations that might make this process time-consuming or challenging.

While Exchange 2016 and 2019 will be supported for some time to come, organizations running them appear to be doing a poor job of keeping their environments up-to-date. 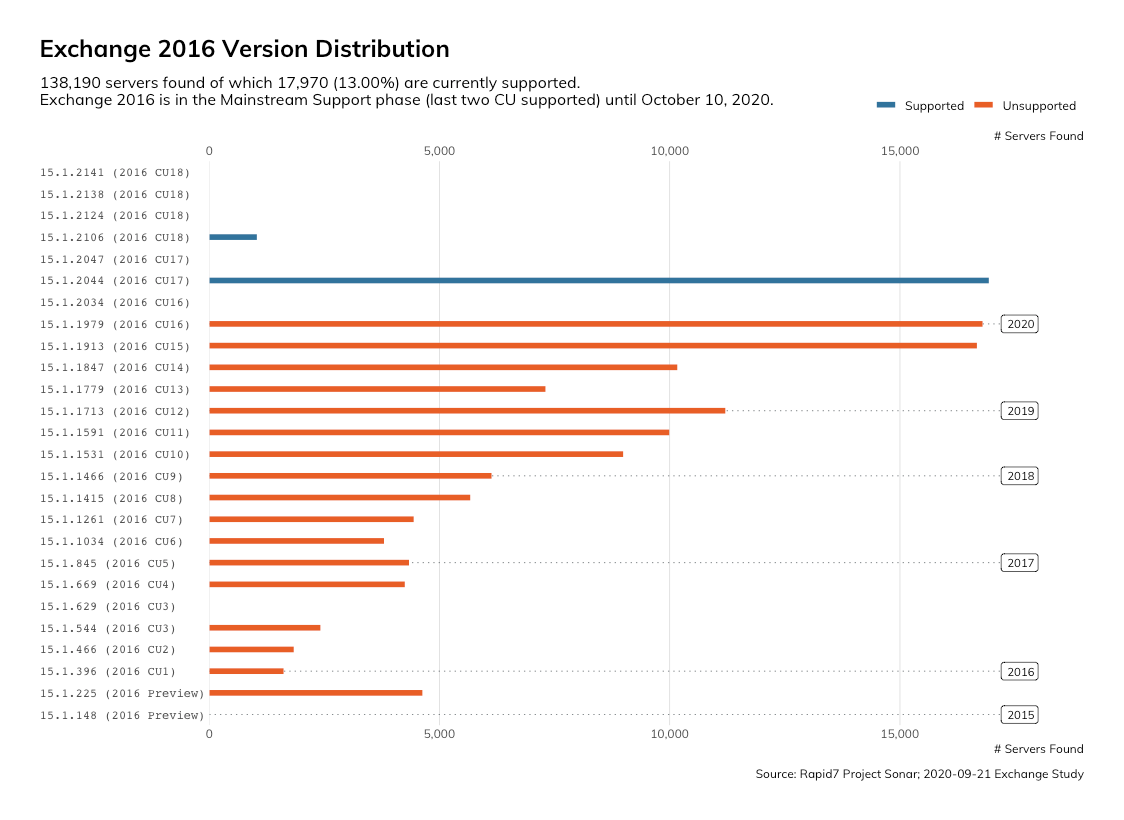 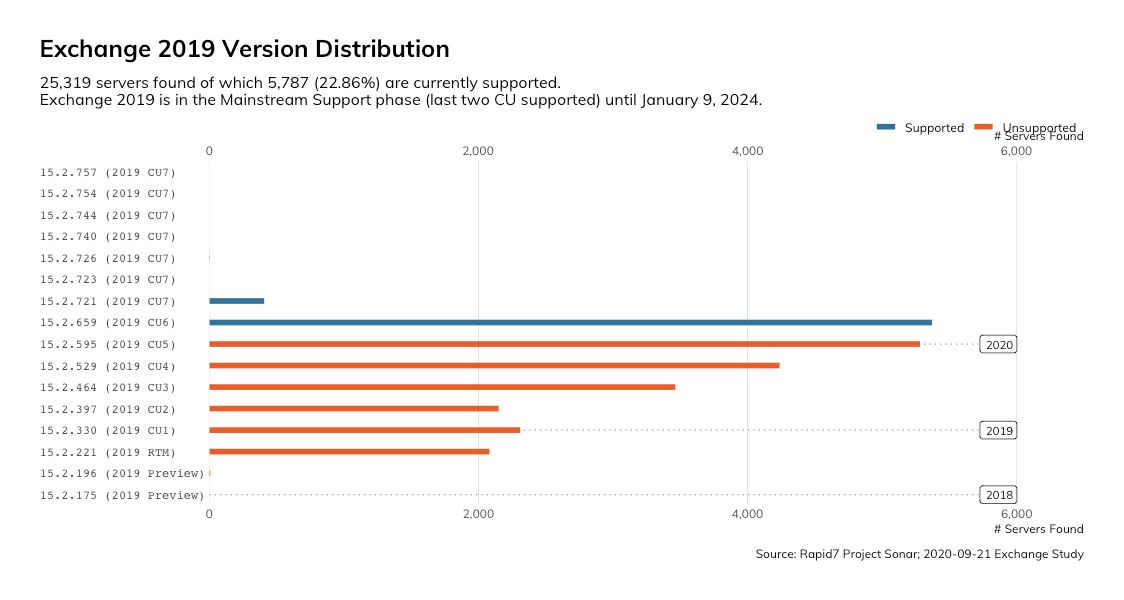 Given the potential risks that a compromised Exchange environment present, we have the following recommendations:

Upgrading an Exchange environment is a very complex task that is compounded by the server and client dependencies. This is why planning in advances is critical. Here are some examples of some issues organizations may run into when planning an upgrade:

Assess Your Environment for Microsoft Exchange Vulnerabilities and Take Action