The Rapid7 team has been busy evaluating the threats posed by last Friday's Shadow Broker exploit and tool release and answering questions from colleagues, customers, and family members about the release. We know that many people have questions about exactly what was released, the threat it poses, and how to respond, so we have decided to compile a list of frequently asked questions.

On Friday, April 15, a hacking group known as the “Shadow Brokers” released a trove of alleged NSA data, detailing exploits and vulnerabilities in a range of technologies. The data includes information on multiple Windows exploits, a framework called Fuzzbunch for loading the exploit binaries onto systems, and a variety of post-exploitation tools.

Who are these shady characters?

The Shadow Brokers are a group that emerged in August of 2016, claiming to have information on tools used by a threat group known as Equation Group. The initial information that was leaked by the Shadow Brokers involved firewall implants and exploitation scripts targeting vendors such as Cisco, Juniper, and Topsec, which were confirmed to be real and subsequently patched by the various vendors. Shadow Brokers also claimed to have access to a larger trove of information that they would sell for 1 million bitcoins, and later lowered the amount to 10,000 bitcoins, which could be crowdfunded so that the tools would be released to the public, rather than just to the highest bidder. The Shadow Brokers have popped up from time to time over the past 9 months leaking additional information, including IP addresses used by the Equation Group and additional tools. Last week, having failed to make their price, they released the password for the encrypted archive, and the security community went into a frenzy of salivation and speculation as it raced to unpack the secrets held in the vault.

The April 15th release seems to be the culmination of the Shadow Brokers' activity; however, it is possible that there is still additional information about the Equation Group that they have not yet released to the public.

Should you be worried?

A trove of nation state-level exploits being released for anyone to use is certainly not a good thing, particularly when they relate to the most widely-used software in the world, but the situation is not as dire as it originally seemed. There are patches available for all of the vulnerabilities, so a very good starting point is to verify that your systems are up to date on patches. Home users and small network operators likely had the patches installed automatically in the last update, but it is always good to double-check.

If you are unsure if you are up to date on these patches, we have checks for them all in Rapid7 Nexpose and Rapid7 InsightVM. These checks are all included in the Microsoft hotfix scan template.

If you want to ensure your patching efforts have been truly effective, or understand the impact of exploitation, you can test your exposure with several modules in Rapid7 Metasploit:

In addition, all of the above exploits can also be pivoted to a Meterpreter session via the DoublePulsar implant.

What else can you do to protect yourselves?

If patching is still in progress or will take a little bit longer to fully implement (we get it) then there are detections for the exploits that you can implement while patching in underway. For examples of ways to implement detections, check out this blog post from Mike Scutt.

Rapid7 InsightIDR, our solution for incident detection and response, has an active Threat Community with intelligence to help detect the use of these exploits and any resulting attacker behavior. You can subscribe to this threat in the community portal. For more on how threat intel works in InsightIDR, check out this 4-min Solution Short.

It is also important to stay aware of other activity on your network during the patching and hardening processes. It is easy to get distracted by the latest threats, and attackers often take advantage of defender preoccupation to achieve their own goals, which may or may not have anything to do with this latest tool leak.

What about that IIS 6 box we have on the public internet?

It is very easy for commentators to point fingers and say that anyone who has legacy or unsupported systems should just get rid of them, but we know that the reality is much more complicated. There will be legacy systems (IIS 6 and otherwise) in organizations that for whatever reason cannot just be replaced or updated. That being said, there are some serious issues with leaving systems that are vulnerable to these exploits publicly accessible. Three of the exploits (“EnglishmanDentist”, “EsteemAudit”, and “ExplodingCan”) will remain effective on EOL systems and the impacts are concerning enough that it is really not a good idea to have internet-facing vulnerable systems. If you are in this position we recommend coming up with a plan to update the system and to keep a very close eye on the development of this threat. Due to the sophistication of this tool set, if widespread exploitation starts then it will likely only be a matter of time before the system is compromised.

Should you be worried about the Equation Group?

The threat from Equation Group itself to most organizations is minimal, unless your organization has a very specific threat profile. Kaspersky's initial analysis of the group lists the countries and sectors that they have seen targeted in the past. This information can help you determine if your organization may have been targeted.

While that is good news for most organizations, that doesn't mean that there is no cause for concern. These tools appear to be very sophisticated, focusing on evading security tools such as antivirus and generating little to no logging on the systems that they target. For most organizations the larger threat is that of attackers co-opting these very sophisticated and now public exploits and other post-exploitation tools and using them to achieve their own goals. This increases the threat and makes defending against, and detecting, these tools more critical. We have seen a sharp decrease in the amount of time it take criminals to incorporate exploits into their existing operations. It will not be long before we will start to see more widespread attacks using these tools.

Where should I build my underground bunker?

While this particular threat is by no means a reason to go underground, there are plenty of other reasons that you may need to hide from the world and we believe in being prepared. That being said, building your own underground bunker is a difficult and time consuming task, so we recommend that you find an existing bunker, pitch in some money with some friends, and wait for the next inevitable bunker-level catastrophe to hit, because this isn't it. 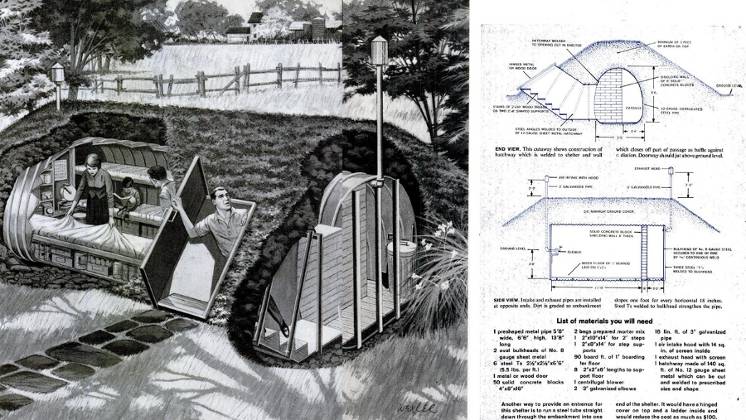