Welcome back to the crazy adventure that is my family's life across two continents. I flew on flybe to London two days after one of their planes had an engine fire over Northern Ireland, but it was predictably uneventful, so I have a lot more to say about our "home visit" for the holidays just nine days before I returned to Boston for work in the unlivable -7 degrees (C) with ~20% humidity.

I briefly touched on the entire family traveling back to the States  a few months ago, but I didn't go into any detail about the process itself. I have gotten so good at navigating two Smart Cartes that I am thinking about going pro. Since I travel a lot, I happen to rely heavily on TripIt and value its notifications for delays, cancellations, and the inevitable gate change in Newark airport. Having prepared ourselves for the hell that four hours of layovers in Newark were guaranteed to emulate, I was happy to see a 45-minute delay for our plane to depart Belfast International. With a pile of bags, I called our taxi and adjusted the sensible two-hour window back accordingly. However, upon arriving at the airport, we were told by the United Airlines flight crew there were no queues because check-in was about to close. Apparently, flight check-in needs to be complete one hour prior to scheduled departure, without exception. To keep with the theme, the United crew in Newark demanded that I sign the signature page of my daughters' passports before they would accept it as a legal document and let us get on the plane home to Belfast. This was our fifth international flight with these passports. They are three years old. I love logical rules.

Through sickness and chaos

When your family of four is partially surrounded by three people with food poisoning [rows of six mean that one of us is with two strangers], I would have hoped for a better vetting process for their flightworthiness than "are you sure you can last five and a half hours?" As you might expect, the family slowly transitioned to the rear of the plane to stay close to the toilets, but that didn't save me from an hour spent sterilizing a few shoes and the sides of our seats and bags. You'll be happy to know that according to our flight attendant (who had already shown signs of incompetence), he "is not qualified to clean vomit" and "not allowed to touch it". Luckily, it never spread to anyone in my family, as I have no idea what process of diagnosis was followed to determine they had food poisoning. 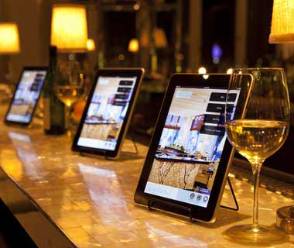 No matter how bothered you think you get when someone's kid is screaming in an airport or on your plane, I can assure you that most of us are twice as bothered/stressed/embarrassed by our own kids reaching this point. Before the first time, my wife and I clearly established the standard operating procedure of "abandon normal rules" while travelling by air. While in the airports, this means a tablet can be viewed on tables, on chairs, and, if the "Riviera" restaurant in EWR terminal C ever gets it together, in the restaurant. You see, this restaurant had the great idea to let its patrons order via iPads placed on each table, and then use them to search the internet, check on their flights, and peruse a decent craft beer selection (I had a Saison Dupont because I'm fancy). The only problem is that you can access YouTube and keep a toddler content with muted videos, but you need to constantly touch the screen because the entire system restarts if you do not interact for five minutes. It doesn't matter if you ordered food or not. Apparently, if your flight is not for another three hours and you're waiting for food, you still have no interest in using the iPad unless you hit 'refresh' every four minutes and 59 seconds. When on flights, abandoning normal rules means having a very wide selection of snacks, coloring books, and magnetic puzzles to hopefully curb any tantrum that emerges from the exhaustion.

I purposely don't say much about my children in this blog for various reasons, but I want to use them to help illustrate some lessons that I hope can benefit future parents who choose to travel long distances with young children. Scientists that study anything with the remote possibility of being hereditary have based studies around identical twins for years. There was a sizable National Geographic article on this fact a couple of years ago. Being a rather curious person, I have learned a lot through trial-and-error and A-B testing with our identical twins. For example: we have sippy cups with red, green, and blue caps. Every morning, we place watered down juice near the girls' room in two of these cups because they love juice while they collect themselves. This led to an "experiment":

I have witnessed this same decision over and over. There is never any fighting, but rather polite handing of specific cups to the right sister. 'Red' and 'green' seem to be the most desirable. What does this mean? I have no idea, but it fascinates me. 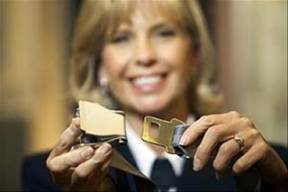 Anyway, my entire point of this tangent was that having two children with identical DNA helps you to learn what not to do, so you can tweak your approach, and sometimes, when rational thought should be thrown away. Trying to stick with your toddler's potty training while on a transatlantic flight? A rational conversation works 50% of the time. A flight attendant demands toddlers wear a seatbelt that slides off their legs because FAA rules set age limits while the NHTSA uses more logical weight limits for car seats? DO NOT TELL THEM TO WEAR IT! Just ask if they can figure it out. Like to swing your kids around to hear the excited giggles, but always make sure not to yank a shoulder out of joint? 50% will still end up with you in the Emergency Room on Boxing Day to have the doctor perform a "reduction" to resolve a case of Nursemaid's Elbow.

An amazing aspect of scientific theories is that the community needs to create some experiments solely to disprove them before they gain acceptance. This is why reporters, politicians, and sales people using terms like "people are saying" and "studies show" are unbearable. They leave no possibility to reject findings or opinions. The Jordan's Furniture brothers love using "studies show you must get eight hours of sleep a night and you can't catch up later" to hawk their wares. Rubbish that preys on the availability cascade.

Red eye flights are exhausting, but only because of the 3-4 hours of sleep before starting a new day. Nassim Nicholas Taleb's theory is that the human body is "antifragile", i.e. it gets stronger when confronted with a reasonable amount of fluctuation in diet, sleep, etc. Results from weightlifting support this theory, while swinging toddlers by the arms do not (unless my daughter now has a stronger elbow). Doing some push-ups or other exercise when you get to a new time zone instead of immediately napping is shockingly effective and eases adjustment when combined with staying awake until 23:00 the first night. Well, you can't get toddlers to do push-ups (usually), but you can help them make up for the shift easier than you'd think. It seems that a child who normally sleeps eleven hours and naps for two can catch up by sleeping four hours on a flight across five time zones, taking a five-hour nap, and sleeping thirteen hours the next night. I learned math in the US, but I guess 11 2 11 = 4 5-5 13... or something. Either way, it was nice to sleep until 10:25 on Saturday. 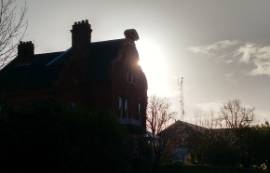 Having had the Internet throughout my adult life, I continue to find it hard to imagine the significant isolation over hundreds of years that caused two nations as similar as the US and UK to create such independent and oddly different notions of normal. Let me cover a few minor observations before giving a final topic the paragraph I think it deserves:

Last month, I covered the disturbing development of Black Friday shopping coming to the UK. Soon after I wrote this, I found out about the Belfast custom of "Black Eye Friday". I also heard that a housewife described it as "Black Friday", but its description properly explained both and I don't want it getting confused with shopping in massive crowds. This intriguing tradition is the last Friday before Christmas each year when a great deal of coworkers leave the office early for a solid eight to twenty hours of drinking together before the holidays. The Belfast office did not officially participate, but we did have a "swapping santa" gift exchange that is similar to a yankee swap, except for a couple of rules and the fact that two bottles of Buckfast were gifted. The name "Black Eye Friday" comes from the high frequency of individuals to air their grievances with colleagues, leading to a noticeable number of fistfights when the constructive feedback is not well received. "Black Friday" was used to describe this same evening because the night is a black hole for communication when families are home wondering what the employed spouses could be doing and when/if they will be home. Take that, boring American Black Friday and your measly fistfights over 4k televisions.