My last post of idiocy in 2014 is going to be consistent with my prior schizophrenic ramblings. I once again bounced between my country of residence (Northern Ireland), country of birth (United States), and country of ancestry (England), but most of what I experienced was independent of the location, so I am organizing it in a different way. I've graduated to giving directions to locals and becoming part owner of a local brewery, but those topics don't fit my chosen narrative for the month, so on with it:

As a child of the United States, I grew up with this idea of Europe as being a more literate part of the world that laughed at the average American's geography knowledge. The European Union was some sort of new version of society that brought together very different cultures and united them under a common goal of appreciating each other's differences and not becoming the United States as they make life better together. I just don't find that the countries in Europe appreciate each other's customs as much as I anticipated (and, excluding politics, it tends to adopt more US-like behaviour than I expected).

Belfast loves Christmas. I was the strange foreigner last Friday walking around Belfast streets without a Christmas jumper. According to my wife's experience, November and December shopping here is a continuous onslaught of crowds in every shopping plaza, worldwide chain, and niche shop you can find. Given this and the many signs around Belfast displaying either "Merry Christmas Belfast", "Happy Christmas Belfast", or "Merry from Belfast Christmas" [sorry- I hate signs that jumble the words to be cool], I am a little surprised that the Belfast Christmas Market in front of City Hall is only in its tenth year of existence. My first experience with Christmas markets was on a trip to Munich and Berlin with my wife a few Decembers ago. In Germany, the combination of small stands and walk-through shops offer numerous types of handmade crafts, toys, and festive decorations whose origins are unlikely to be forgotten. Oh, plus mulled wine (or gluhwein) is a hot, spiced wine that would probably be disgusting if you tried to drink it anywhere else, but is perfect while walking around an outdoor market on a German December day. 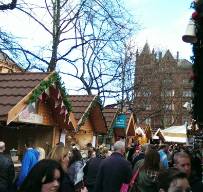 Contrast this experience with the Belfast Christmas Market and you quickly see how little the European Union is the melting pot I imagined while visiting in two-week stints. The market is very festive and very enjoyable, but it has a lot more in common with the Spring Market (in the same location in May) than any Christmas market I visited in Germany. All of the stands were built from scratch the week before it opened, which is very cool, but there are only two to three that are pitching holiday gifts. The vast majority of stands are the same crepe/jerk/paella/[insert other random non-UK food] stand that you see every weekend at St. George's Market and every other outdoor seasonal market. There is mulled wine and mulled cider, so that's great, but there are also two beer tents that closely resemble the beer tents from spring, except for the fact that one of them is primarily selling beers from Paulaner. I love this chance to have some authentic German beer in Belfast, but noticed that most people in the Paulaner tent are drinking fruit-infused beers (that I have never seen before) rather than one of the many excellent Hacker-Pschorr brews or the no-longer-true "strongest beer in the world". 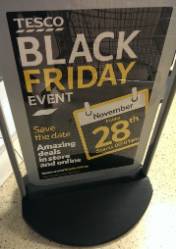 I cannot even tell you the purpose of Black Friday in the US, but I first remember hearing about it around ten years ago. A few friends started to mention that their grandparents take advantage of the extra rest that comes with the increased tryptophan levels from embarrassing amounts of turkey [I know it's a myth] and red wine on Thanksgiving to start their Christmas shopping at the first sign of daylight. Somehow, this has devolved into an assault on Americans deal-seekers to become an need to leave Thanksgiving dinner to wait in a queue for hours to potentially grab a discounted Xbox One or, alternatively, a criminal record when your exhaustion forces you to batter the person in front of you that gets the last one.

You can imagine my delight when Thanksgiving was approaching and I began seeing adverts for Black Friday in Belfast [like the one pictured to the right]. I never imagined that Europe would want it, but it seems that Black Friday has been such a success state-side that The Kingdom just had to have some of that physical-confrontation-and-mediocre-deals-at-early-hours goodness. The main part that I don't understand is why anyone here would take time off from work for this "event", since the initial logic was that you are going to be away from the office anyway, yet Thanksgiving is just another Thursday here.

When I first visited Belfast ten months ago to judge my family's ability to adjust, I noticed how much milder the winter was without thinking about just how much farther north it is than the Boston area. Being twelve degrees farther north as we quickly approach the Winter Solstice hints that this is not a good year-round home for those prone to depression. There will be seven hours and fifteen minutes of "sunlight" this coming Sunday, which is closer to the five hours and fifty-four minutes in St. Petersburg than the nine hours and four minutes that Boston will see. I did experience a beautiful 8:30 sunrise on my recent coastal ride to the Dublin airport, but my phone unfortunately failed to capture anything at our rate of speed.

Intuitively, being as far north of Boston as Boston is north of New Orleans would make you expect to have a longer winter. Instead, as you can learn from climatologists, worldwide weather patterns are not that simple, so there is a much longer period of awkwardly choosing the wrong coat each morning. It is cold enough to justify a great deal of heating this time of year, yet I had trouble finding a decent humidifier to balance the dryness (without causing mold to grow) because the climate is also a lot wetter than the Northeast US, as the bright green moss next to major city roads demonstrates.

I have recently been obsessed with how great it is to be living in the future. We definitely didn't know what 2015 would be like in 1985 (as you can see by re-watching "Back to the Future II"), but it is thrilling to be able to simultaneously watch "Guardians of the Galaxy" and talk to a coworker in the office while sitting on a plane over the Atlantic Ocean. To the contrary, while I find it hard to estimate the passage of time being so far away from typical annual events, this doesn't explain the "frozen in time" feeling you get when you drive just minutes from Belfast to places like the Giant's Ring or Islandmagee. One is an ancients structure built by an early civilization (or aliens, if you believe "Stargate" is a work of nonfiction), and the other is an isolated little farm community on the east coast of Northern Ireland that has black sheep, white sheep, black-and-white sheep, and even mating sheep, which is great for toddlers to witness as you drive passed.

Somewhere between "the future" and "pre-dates the wheel" is the transportation situation around London. This feels reminiscent of my earlier blogs when I whinged about travelling inefficiencies, but I went through my own version of "Planes, Trains, and Automobiles", minus the humour, in which I noticed:

Hopefully, I will be more positive in 2015, but I can't make any promises. We'll be travelling to and from Boston, with extra long layovers in Newark, so I doubt my next update is going to be "all sunshine and lollipops".