Another month has passed, and so I am once again capturing my experiences as a sarcastic foreigner in a country full of sarcasm. Please accept my apologies for the length, but as the oft-misunderstood Samuel Clemens once wrote: "I didn't have time to write a short letter, so I wrote a long one instead." Rapid7 officially announced our presence here in Northern Ireland and it feels great that the teams had accomplished so much before the press release even arrived.

I want to start with something I had completely wrong in my Anecdotal Evidence blog: Ulster is not and has never been a county in Ireland or the United Kingdom. This means that my "county-within-a-county" rant was a waste of text, other than showing just how confusing some things are in Northern Ireland. You see: Ulster province was made up of nine counties in the Northeast of Ireland, but does not currently have an official government purpose, given that six of those countries now comprise Northern Ireland. The use of the term Ulster is now used very differently around Belfast, and if you type "ulster" into google.com (as opposed to google.co.uk), it starts to auto-complete with the county in New York, so that is likely how I got down the wrong path. Either that, or I cannot mentally process complex disputes over regions because the borders in my home state of Vermont did not change after it went from being land claimed by both New York and New Hampshire to a tiny Luxembourg-like independent nation to the fourteenth state in the late 18th century.

Anyway, on with the things I learned that are not completely wrong (yet). As I often do, I have a series of small observations and conclusions from my past month as an American on secondment.

I spent six days in Boston and Newport and left with a business traveller's view of New England (which is neither a province nor a county). It all started on two United Airlines flights that inexplicably skipped seating rows 13-19 and 13, 15-19 because apparently, in 2014, we are still afraid of the number 13 and an inconsistent number of its ill-hearted teen friends. Those counting errors were sandwiched around a situation where I had only 2 hours to make a connection between United Airlines flights in Newark airport (and it involved some running). 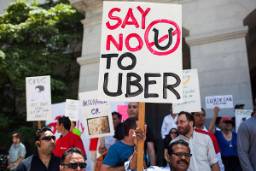 Once safely in New England, I worked from our Boston and Cambridge offices as a visitor and witnessed the kind of traveller's awe in Andrew Wallace that will hopefully kill off some of the heads-down cynicism that I brought on my trips in recent years. I had the pleasure of contrasting a few convenient and friendly UberX drivers with an incompetent, angry taxi driver who not only lied about the functional nature of his built-in credit card terminal, but completed the story with a makeshift sign containing Uber and a cross through it. He is doing Uber a great service.

Another learning experience was trying to find a time of day when I could video chat with my family, given that (a) I was five hours behind them and (b) my children are in bed three hours before I would leave a US office.

The trip back to Belfast was uneventful, except for the fact that a Chicago-area contract worker allegedly set a fire in the FAA's control center and tried to include himself in it. This led to regular TripIt updates telling us that our United plane was not arriving in Boston, so our connection in Newark was at risk (more so than when arson is not involved, at least). So, some Belfast charm from Roy Robinson got us on a direct Aer Lingus flight to Dublin. If you have never flown Aer Lingus, you should know that it is a unique experience: there are a ridiculous number of announcements, including incredible detail around the route over remote parts of Canada, all of which were roughly 300 times louder to those of us using the supplied headphones. they accept both Euro and US cash, and the armrest only lifts 70% of the way up for no understandable reason. At least this itinerary change had a happy ending, thanks to the fastest customs processing in the world in Dublin (where you can use your mobile phone everywhere but at the desk), especially when they hear that you are going to be the UK's problem anyway.

By far, the most common question people have asked me since we moved to Belfast is "What has been the biggest difference?", so rather than continuing to bother everyone with my "not sure" response, I figured that I should use this space to finally answer the question.

So, I guess the biggest difference here has been the change in me. Wow... the five of you that read this far haven't been paying attention if you thought that was serious. It has definitely been living without a credit history. I know. I cheated because it wasn't a bullet point, but there are no rules to this. I am not sure how well you can multiply in your head, but take your US credit score (they range from 300 to 850), multiply it by zero and add 300. That is what your score (using the same scale) will be in any new country. Have an account with a worldwide bank like Barclays? A mortgage with a worldwide bank like Santander? Started getting small loans at 18 to build an amazing score? Good for you, kid. Same math. Enjoy your limited checking account and regularly asking someone to vouch for you.

With that out of the way, I am off to Black Hat Europe to see how the security conferences in Europe differ from the US. I went to Cartes outside Paris once, but that doesn't count, since the French invented smart cards and the US is still fighting against their adoption because they have perfected payment card fraud processes.