After writing my last blog, I felt like some people might mistakenly conclude that my wife and I are unhappy with our decision to move to Northern Ireland. I admit to using this space to vent about horribly-run businesses a bit (still fighting for the "privilege" of a current account), but after two months, I love it here. If you, the random reader, ever get the opportunity to take a secondment, I highly suggest that you do so. While I think that there are a lot of different countries in which you could find a great home, here are some of reasons that you should stock up on cases of self tanner and trade your way into Northern Ireland: 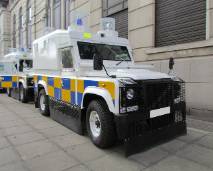 This one is going to be a shock to most of you, but the UN's most recent (2004) International Crime Victimisation Study declared Belfast to be the world's second safest city (once again, utopian Tokyo takes an award). In fact, "Her Majesty the Queen of the United Kingdom and the other Commonwealth realms [such as Canada!]" was just in Belfast for a visit on the 24th and 25th of June. This lovely figurehead with more titles than she can remember just had to meet the cast of "Game of Thrones" and visit the "Antique Roadshow", in that order. I am sure that she had something to say to the Belfast city hall staff, but that is really just a formality when you can meet Khaleesi (and thwart her quest to obtain more titles) and possibly acquire a new/old piece of furniture for one of your palaces. I just got a bit off topic, but while Her Majesty was here, I experienced an uptick in the number of armored Range Rovers passing me on the street. Plenty of people congregated around city centre with the hopes of seeing an old woman from afar, but never once was there any interruption in day-to-day life. Any reputation that Belfast has as a city of terror is either the result of the political troubles that ran through the nineties or the annual parades on The Twelfth. The twelfth of July is the date when Belfast has a parade commemorating the Dutch Protestant king William of Orange's victory over Catholic King of England James II at the Battle of Boyne in 1690. This battle is celebrated for helping Protestantism gradually become the predominant religion of Northern Ireland and, at times, the crowds get a bit overzealous after constructing massive wooden pallet and tyre bonfire sculptures. After living in Boston when the Patriots won their first Super Bowl and just outside the city when the Red Sox ended their title drought, my conversations within the office have convinced me that this zeal does not approach the same kind of flipping-over-cars and creating a spur of the moment bonfire enthusiasm that many US cities expect to accompany a sports championship. It may come as no shock that, having dealt with the troubles of the late 20th century and this annual parade, the police force has the occasional drunk vandal or pickpocket under control. There have actually been times when this law enforcement group has been asked to train others expected to deal with political unrest and instability.

I may be the wrong person to do this paragraph justice because I rarely shop at Whole Foods and am a strong believer in the "not every chemical is a poison" mentality, but the meat, produce, beer, and just about everything meant for consumption is mostly grown or produced in this country, date stamped, and free of hormones/preservatives. While that means that the food that my wife and I are used to leaving in the fridge for 2 weeks spoils in 10 days, we have taken this more as a costly lesson of what not to consume as frequently in the States than a problem with the food here. The beef here is always a little pricier than anything else on the menu and I have only found two places that would prepare my steak "medium rare", but there is unquestionably a different taste to it, which I thoroughly enjoy. Why? I explained the process and reasoning behind "corn-fed beef" in the United States and made more than one person in the Belfast office nauseous. Without the burden of corn subsidies here, there is a noticeable lack of high-fructose corn syrup where a natural sugar would suffice and animals being unnaturally fed dry, tasteless cornmeal. On a completely different note, there is a type of food that is better regardless of corn's involvement...

Okay, I know what you are thinking: "I love bacon in the US. This cartoon avatar blogger is about to go too far." That is a completely valid sentiment, but you are wrong. I have been a huge fan of bacon since the two of us were first introduced, circa 1987, and I even strayed away to turkey bacon in college (as an experiment), but I always took the accompanying greasiness and heavy feeling as a balance to the unbelievable taste that I was privileged enough to enjoy on approximately a fortnightly basis. Well, what if I could offer you an healthier way to get that amazing taste? Blasphemy, right? Do yourself a favor and read about "bacon rashers". Bacon baps, bacon baguettes, bacon and maple syrup crepes, Ulster fries, burgers, complimentary hotel breakfast buffets; pretty much everything in this country is made better with bacon rashers. They look better, they don't leave a greasy mess, and they have wrecked me for "streaky bacon", as it is called here. Oh, and that reminds me of another food-related reason to move:

While I did have an amazing bacon sandwich with chilli (don't ask me why there is a double 'l' ) jam, when you are asked "would you like sauce?", there are only 3 expected answers: "no", "red", or "brown". Red sauce is what we in the US have always known as ketchup. Not much to talk about there, other than how much easier that must be for anyone to whom English is a second language. Brown sauce is something that has not migrated across the Atlantic: a delicious vinegary cousin of ketchup that is quite delicious on a bacon bap or scrambled eggs. I have seen many different bottles, but I am told by its loyal fans that it is HP brand or nothing.

I just want to quickly finish this food section by saying that I not yet seen the old diner-style glass coffee pot with disgusting, warm, 3-hour old coffee being served as a bottomless cup. More shops offer espresso-style cappuccinos and americanos than traditional filtered coffee, so I am happy as long as I avoid Cafe Nero (equivalent to Starbucks) and Costa Coffee (somewhere below Dunkin Donuts), but I know that I am just being fancy again.

After all I just wrote about food, I felt that this topic was important. The laziness of Americans is often discussed domestically and overseas, but I have just found that Belfast's layout forces you to walk more. It is small, there is little parking, and most companies establish themselves near Belfast City Hall, which puts you within a half-mile radius of most shops and restaurants. I mentioned in my last blog that I walk to work, but that is not due to any sort of entitlement. There are extensive options for housing within the Belfast postcodes of BT1 through BT9 and many of them would bring with them a sub-30 minute walk to city centre. I use the postcodes to refer to locations because Google Maps gets as easily confused as I do when navigating this city - University Rd is perpendicular to University Square, University Square Mews, and University Ave and they don't all intersect - but the postcode system is both logical and tremendously more descriptive the the expansive zip codes in the US.

Everyone in this country is going to laugh at me because they are constantly convinced that "it is not going to be this nice again this summer", but the weather since I arrived has been excellent. Oh, it rains. It rains quite often, but the temperature in May and June was between 15 and 22 degrees (centigrade) almost every day and I have seen cycles of both five consecutive days of rain followed by five of gorgeous sunshine and 2 hours each way in the same day. I would liken it to Seattle or San Francisco weather, wherein the sky is more often grey and rainy than in Boston or New York, but you never get tropical storms or buckets of rain and, as a result, Belfast gets around ten fewer inches of total rainfall (33 inches) annually than those two cities (43-44 inches). And when it is sunny, it is gorgeous. I have twice driven up to the beautiful Northern Ireland coast (Portrush, the site of the 2019 British Open, is captured in my very amateur panoramic below) and was lucky enough to get days where the clouds were only enough to make the sky more picturesque.

It is a little humid here, so most days feel warmer than I estimate for the thermometer reading, but I have not experienced unbearably hot and muggy days common to the summer months in the Northeast US.

If you consider yourself a history buff, then you already know that the US landed its first 4,000 troops in the European Theatre of Operations in WWII in Dufferin Dock Belfast and that Chaim Herzog, the sixth president of Israel, was born in Belfast. But you should be ashamed for not knowing the site of the Titanic's construction. Throughout the 19th century, Belfast was considered the leading industrial city in all of Ireland, primarily thanks to heavy engineering and shipbuilding. Today, the Titanic Quarter (on Queen's Island) is the site of a lot of new construction, including apartment buildings, offices, and museums about the shipbuilding history and more. Not all of the area has been re-purposed, however, as the Harland & Wolff cranes "David and Goliath" loom large over the landscape and help lost American expatriates find their way out of East Belfast. These cranes are primarily used for repairs today, such as was recently necessary on a massive Blackford Dolphin oil rig from the North Sea. Just next to the Harland & Wolff is (1) an excellent open lot for walking a dog and (2) a much less historical former paint shed that now serves as the main soundstages for "Game of Thrones".

The last reason I think that you should come to work in Northern Ireland is to bear witness to a society that has somehow managed to avoid completely unraveling despite legalized gambling. I know! How could this be true? You can bet on the World Cup from your mobile phone or walk into an "A McLean Bookmakers" store front all over the city. We need to send over some American psychologists to study this first world nation where small gaming locations can be conveniently scattered along the streets for an hour of slots on your way home and yet, civilized life continues. I have actually seen a great deal fewer beggars and homeless people in the city of Belfast than on any San Francisco city block. How can this be? Someone please come take some blood samples or administer some standardized tests to explain what makes it possible for anyone to live without a law to save them from the utter chaos.

I have learned from stand up comics that you always need to get your plug in before the end, so if you are going to Black Hat, please make sure to attend my  briefing with Rapid7's own Jeff Myers.